Another year, another big game to watch! As everyone gears up to cheer on their favorite team, I’m getting ready to binge on some of my favorite game day snacks and appetizers. From the cheesy to the meaty, I’m planning on going all out this year. Not only will I be serving those easy quesadillas that I made last year, but I’m also introducing some brand new jalapeno poppers into the mix.

Jalapeno poppers aren’t really a “new” game day food, but these aren’t your ordinary poppers. These are made with two kinds of cheeses and feature a surprising, tasty ingredient in the filling: popcorn shrimp! I saw the popcorn shrimp while I was picking up some frozen Buffalo wings and potato skins, and figured that they’d make another good (and easy!) option for my spread, so I threw those in the cart too. Then, when I was thinking about how I was going to make my jalapeno poppers I had a brilliant idea…

How to Make: Bacon-Wrapped Jalapeno Poppers

Step One: Get everything you need – popcorn shrimp, cream cheese, cheddar cheese, chives, jalapeno peppers, bacon, and hot sauce, if you want an extra kick. 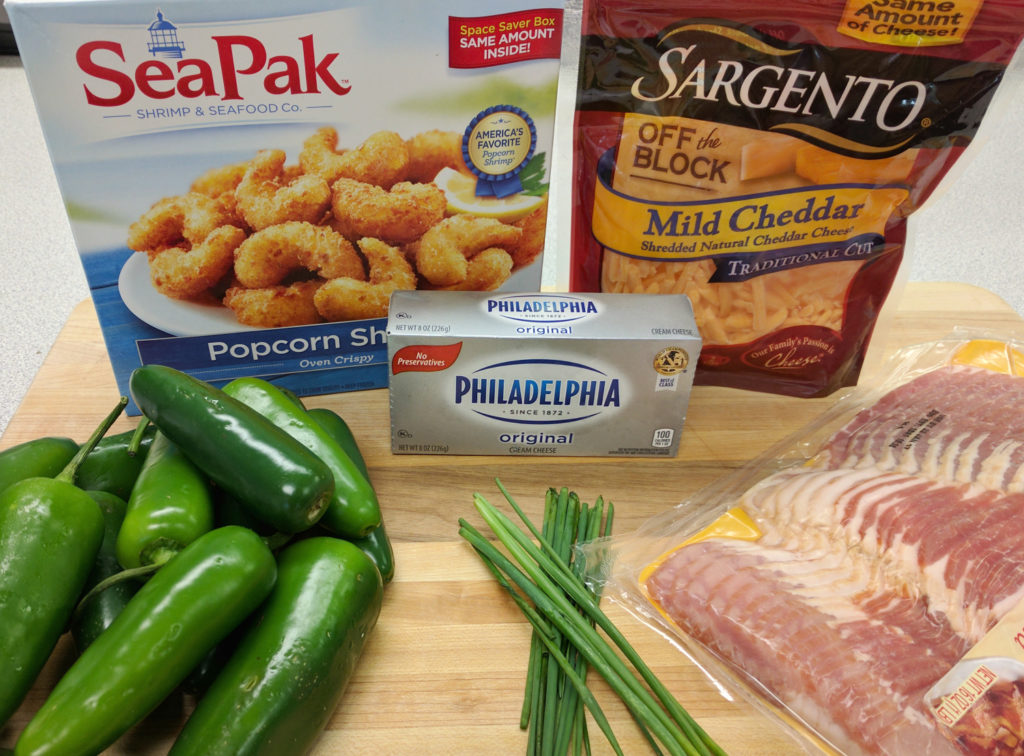 Step Two: Prepare your popcorn shrimp, according to package directions. You only need half the box for this recipe, but you can make the whole box and set them out with some dipping sauces for another appetizer option (or just make a double batch of poppers – they’re that good).

And while those are baking, go ahead and use the time to get your jalapeno peppers cleaned up and ready for stuffing. 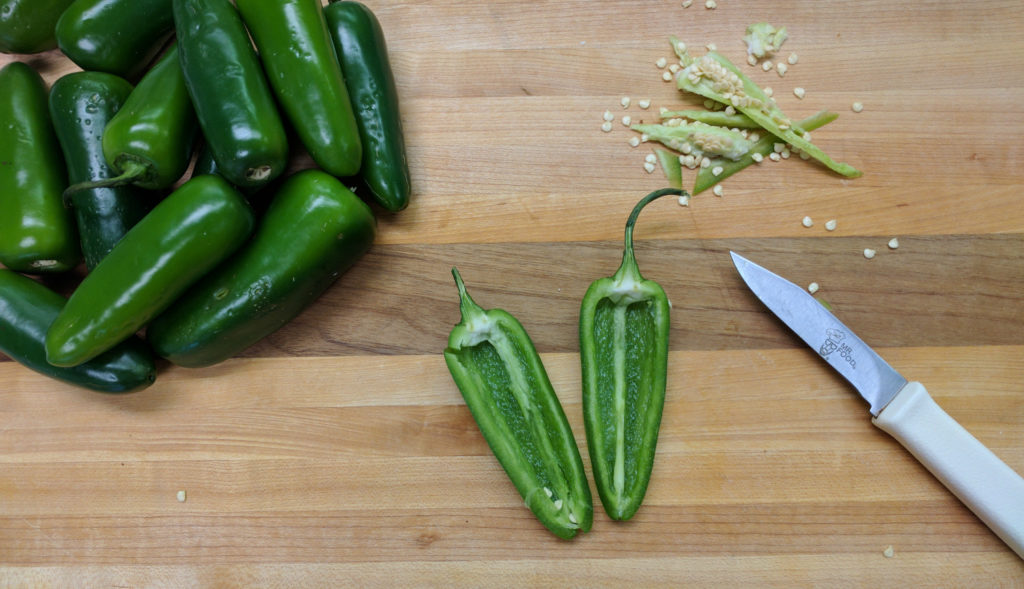 A word of advice, the Test Kitchen highly recommends using gloves to do this. Touching the peppers with your bare hands can cause some irritation, especially if you have sensitive skin. But, even worse, is forgetting that you handled peppers and then touching your eyes or other body parts…ouch!

Step Three: Chop up the shrimp and the chives, then go and grab a medium-sized bowl to mix up the stuffing for your jalapeno poppers. Add in your cheeses and chives, mix it all together, and then stir in the shrimp. (This is also where you’d stir in a few drops of hot sauce, if you want to kick it up a notch!) 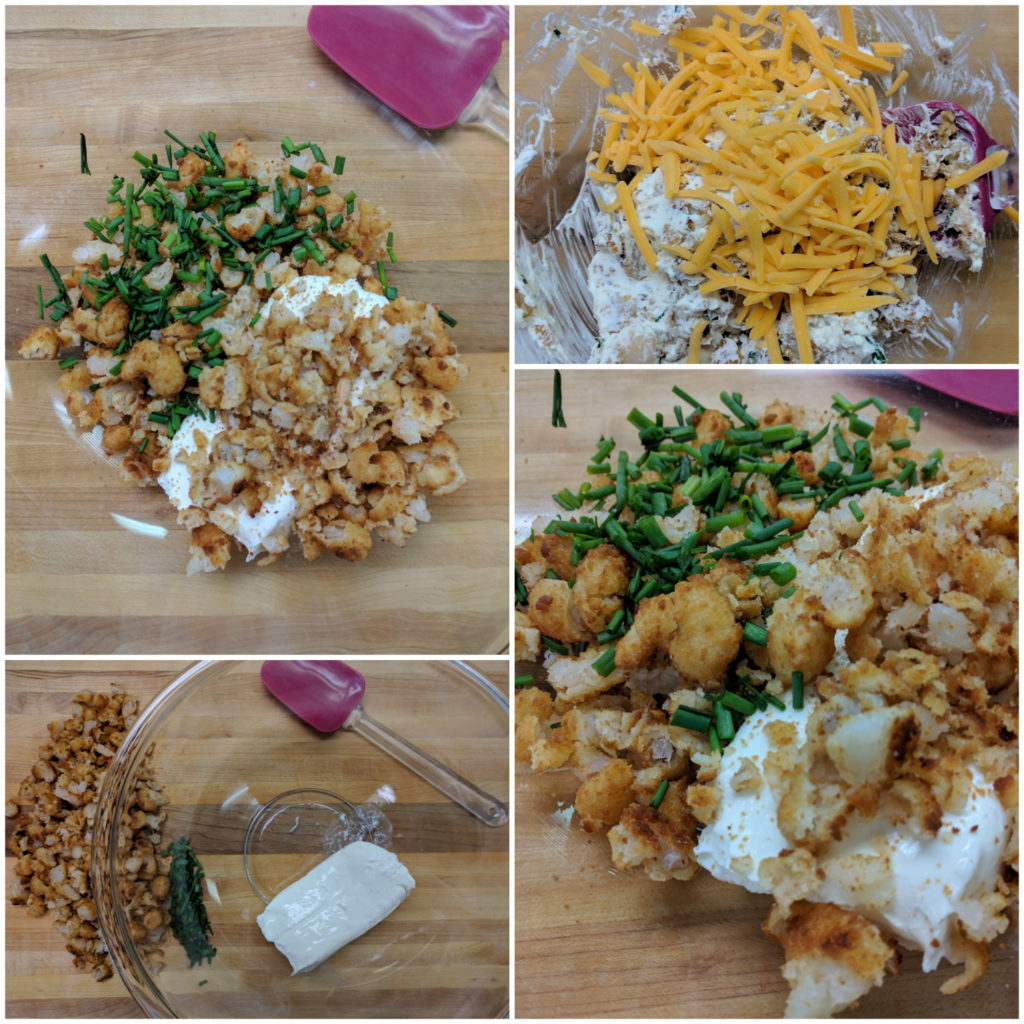 (Note: I did mine a little out of order, but the experts in the Test Kitchen recommend that you combine the ingredients in the order that’s listed on the recipe, as this would be the easiest!)

Step Four: Firmly press a teaspoonful of the shrimp mixture into each of the jalapeno peppers. Then, wrap each one with half a slice of bacon. 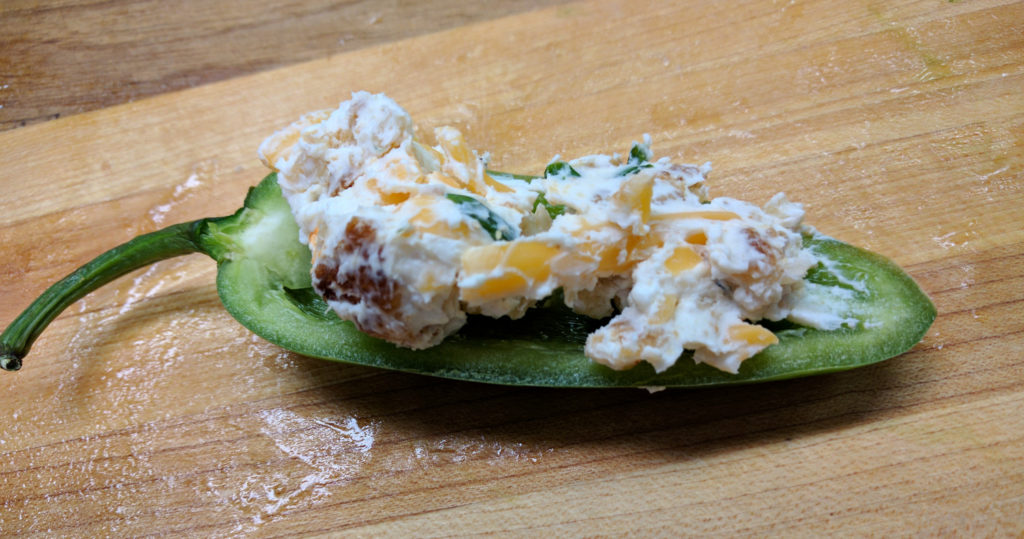 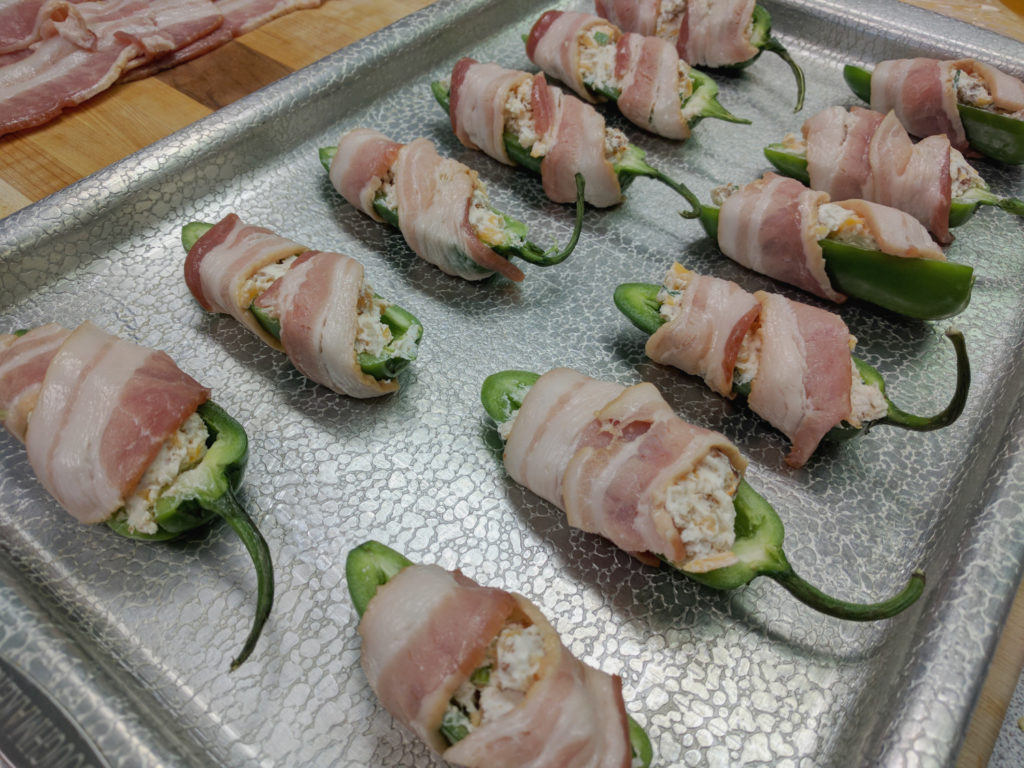 Step Five: Put those babies in the oven to bake for about 20 minutes. That’s just enough time to make a dip, if you have any extra popcorn shrimp. 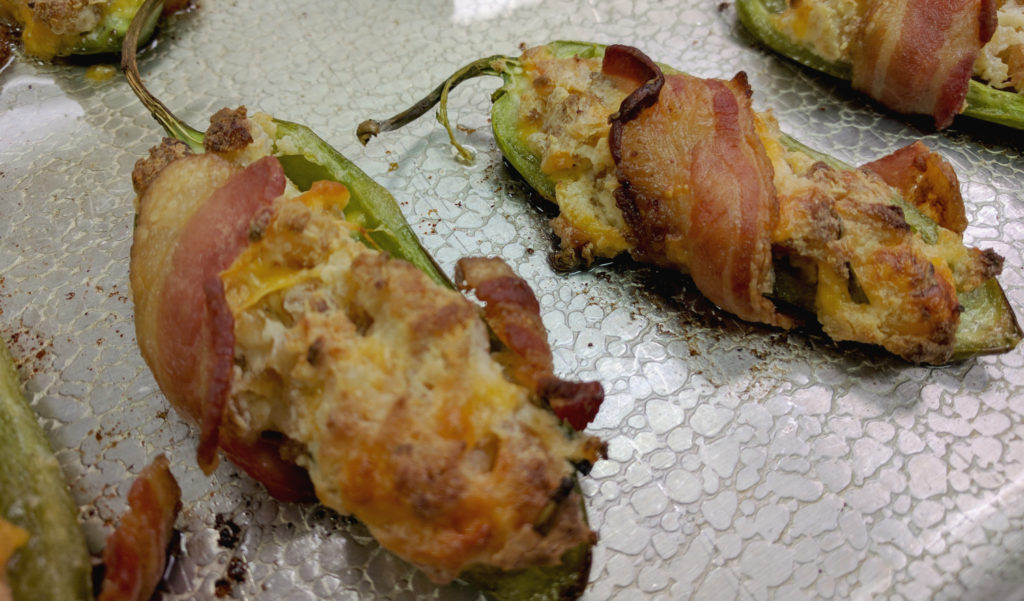 Don’t worry if the bacon curls off a bit from the jalapeno popper. Since it’s wrapped around, it won’t go too far and it gives them a unique look! Just check out what they’ll look like when you plate them: 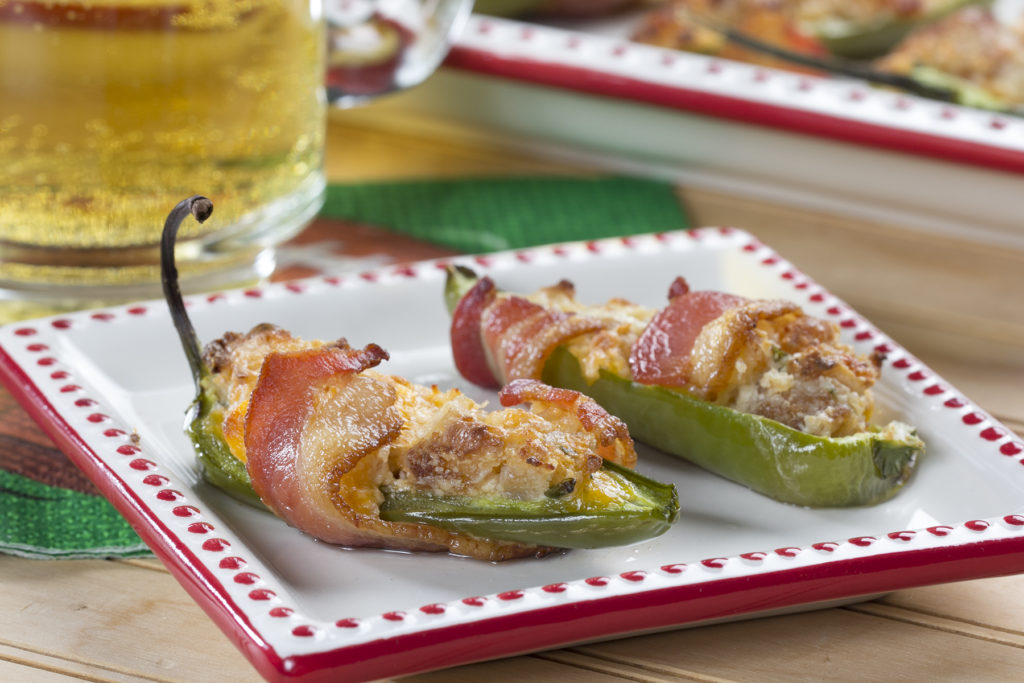 And that’s all there is to it! These Bacon-Wrapped Jalapeno Poppers are a nice change from the traditional, breaded and fried jalapeno poppers. I love how creamy-cheesy they are on the inside, along with the little crunch and flavor that the popcorn shrimp adds to them. Oh yeah, and the bacon…I like that too! I’m pretty sure everyone at my house is going to devour these.

Are you making anything new for your game day spread this year?

This conversation is sponsored by the National Frozen & Refrigerated Foods Association. The opinions and text are all mine. For more great game day recipes visit EasyHomeMeals.com or MrFood.com. (Disclosure.)

Thanksgiving is almost here and Christmas is just around the corner! That means you early planners are already putting together this year's menu. If … END_OF_DOCUMENT_TOKEN_TO_BE_REPLACED

So why am I crazy about the slow cooker? Let me tell you. There is a stereotype that college students live off of microwave pizza, cereal, and instant … END_OF_DOCUMENT_TOKEN_TO_BE_REPLACED