Last year I had the opportunity to go aboard the USS Cole with some of the Mr. Food Test Kitchen team during the 2015 Fleet Week. This year, we were invited to tour the USS Bataan (LHD 5), a multipurpose amphibious assault ship that’s “designed to enable the Navy-Marine Corps team to accomplish a seamless transition from the sea to a land battle.” (Source: USS Bataan Fleet Week brochure). 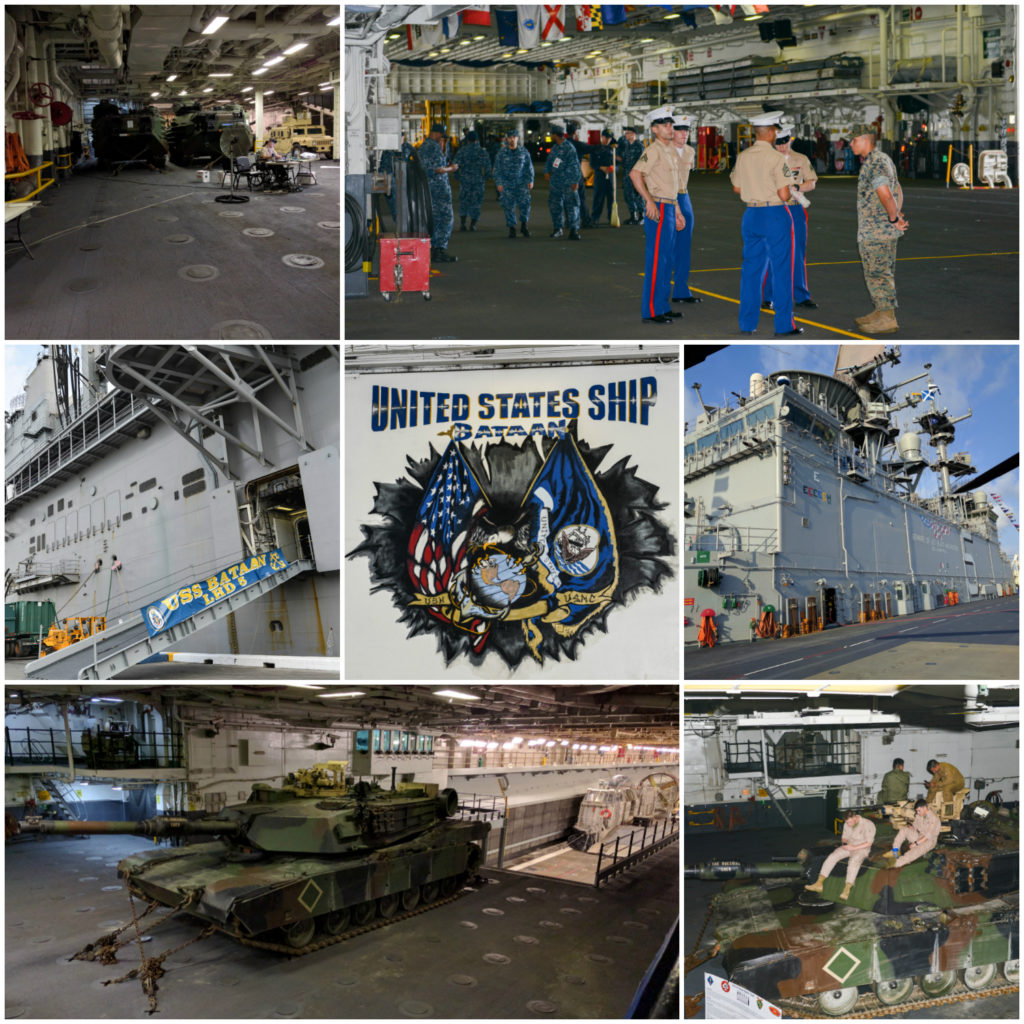 I thought the USS Cole was big, until we got on board the USS Bataan! Just check out this photo from their Facebook page for a size comparison. 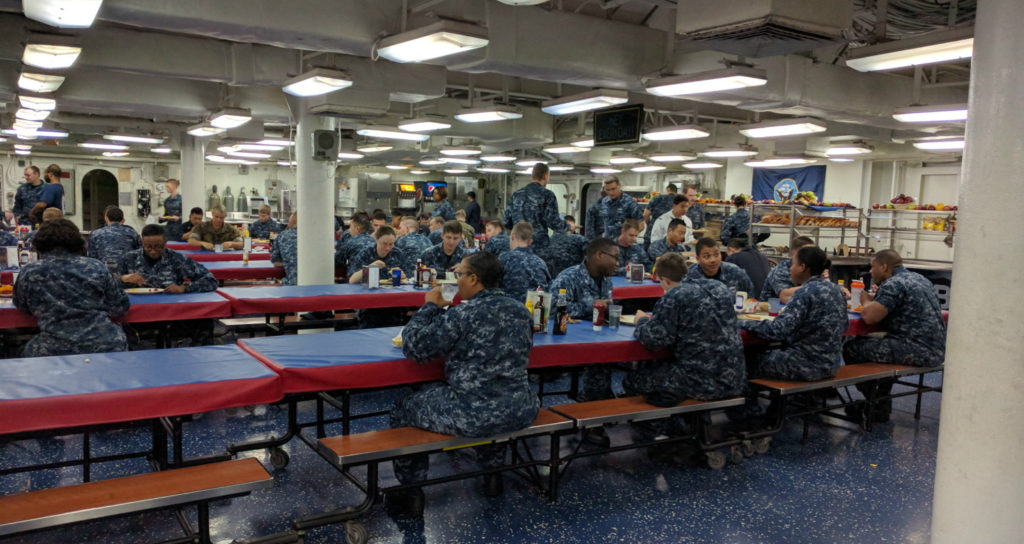 We got there bright and early, so Howard could help serve the sailors their breakfast, which starts at 6am sharp, and we could tour the ship a bit before starting the radio show. 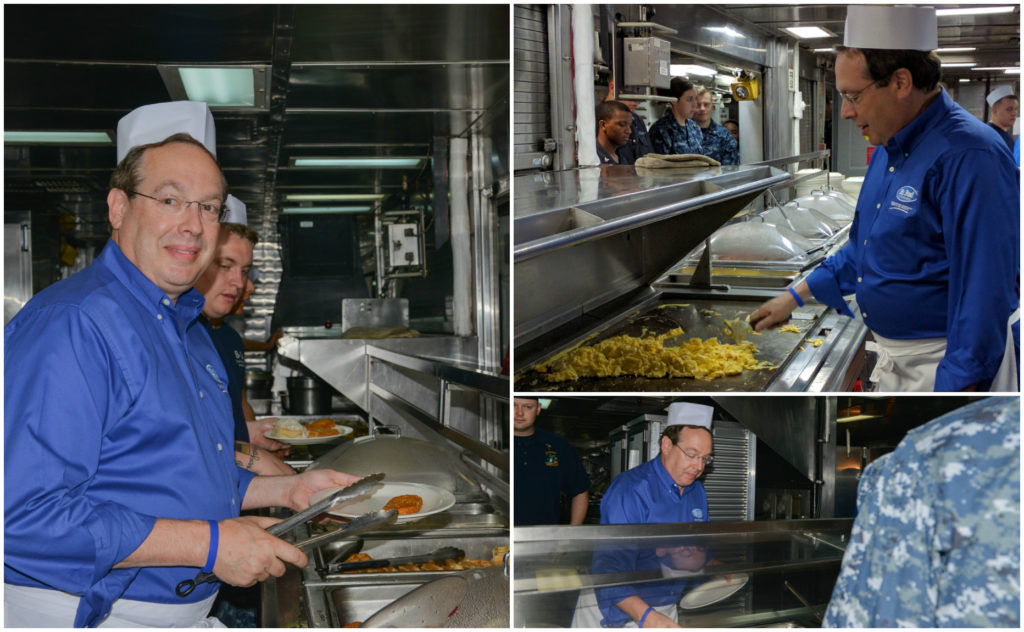 Breakfast on the USS Bataan includes everything from made-to-order eggs, waffles, bacon, biscuits, gravy, hash browns, applesauce, and more. That’s not to mention the cereal, fresh fruit, cookies, and other snacks that are readily available all day long. 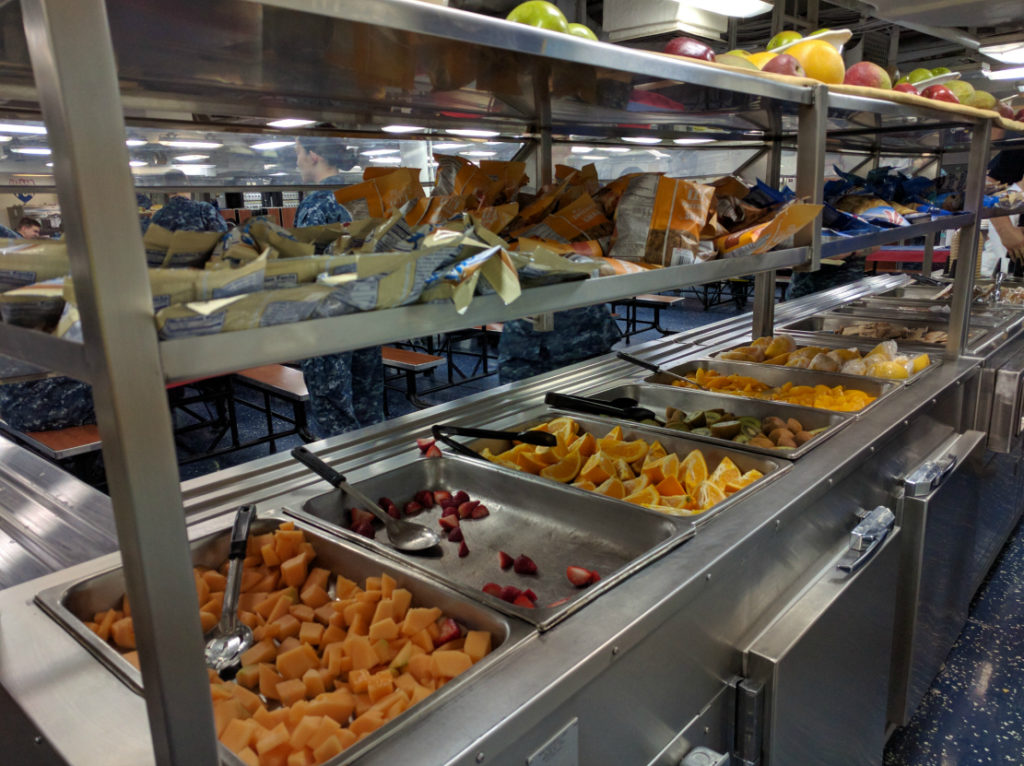 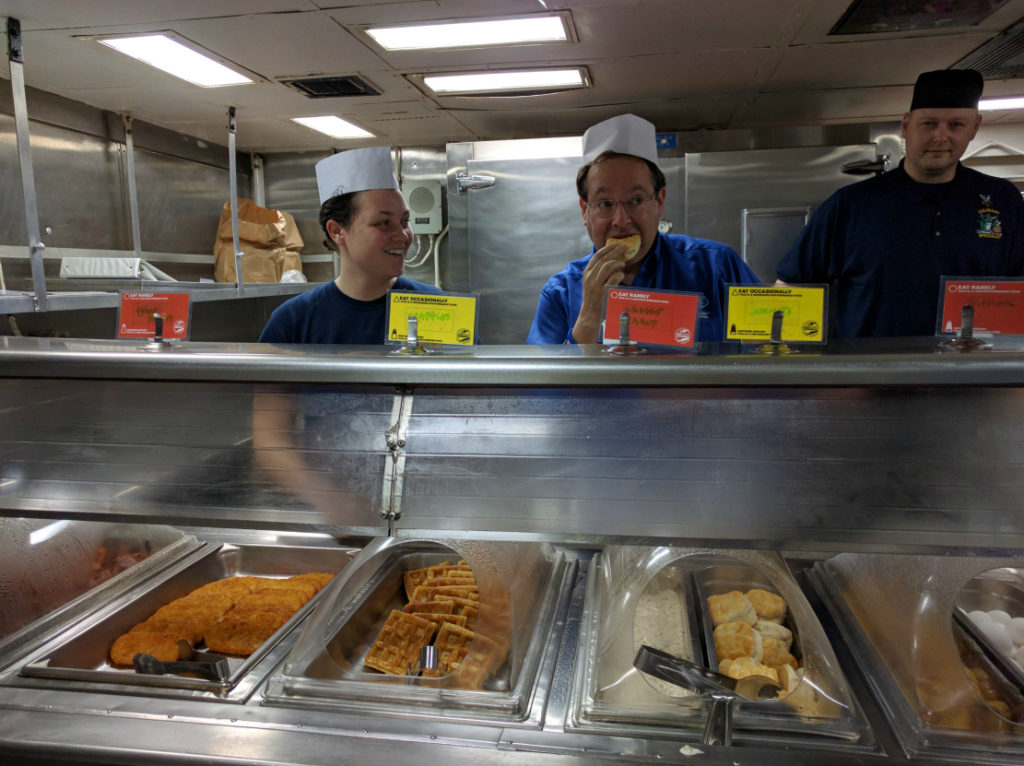 Howard couldn’t resist a taste of those fluffy biscuits!

If you’re wondering why some of the signs above the food are red and some are yellow…well, those are there to help the sailors make healthy choices. Just like a traffic light, green signs indicate the healthiest option for optimal performance, while red signs indicate low-performance foods. The signs also indicate other health concerns, like sodium levels. 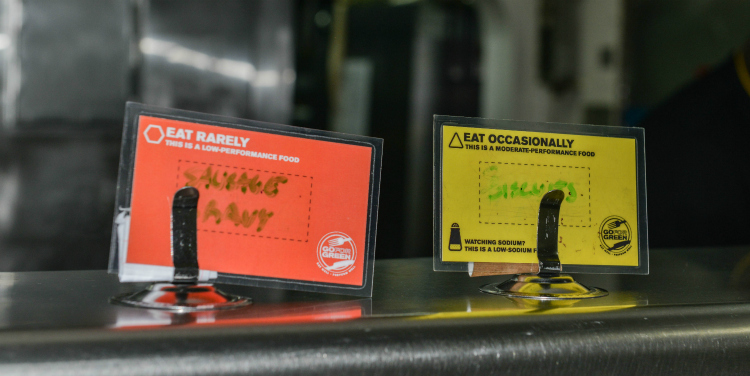 Culinary Specialist 1, Brian Wheeler, who supervises food preparation for everyone on board, gave us the full galley tour. He also shared some fun facts with us. Did you know that every ship in the U.S. Navy has the same menu? And that, although everyone eats from the same menu, officers eat in separate dining halls? Officers also have the luxury of self-serving, whereas general crew members are served one portion at a time. (They can make the line again for another portion!) 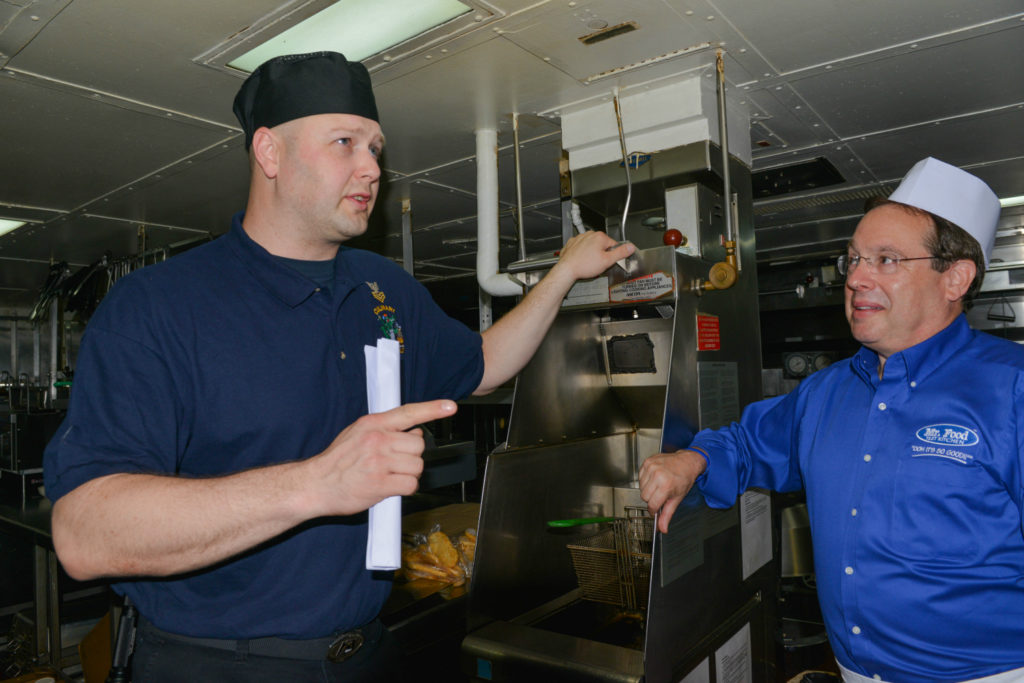 On a typical day, the culinary crew aboard the USS Bataan prepares 4 meals a day for anywhere between 1,200 to 1,800 sailors. When the Marines are on board, this number easily reaches close to 3,000. And if you thought the kitchen was closed in between meals, think again! Culinary crew work around the clock, either preparing food for the next meal, breaking down stations from the previous meal or doing general cleaning of the kitchen. In case you’re wondering what kind of equipment you need to cook for that many people… 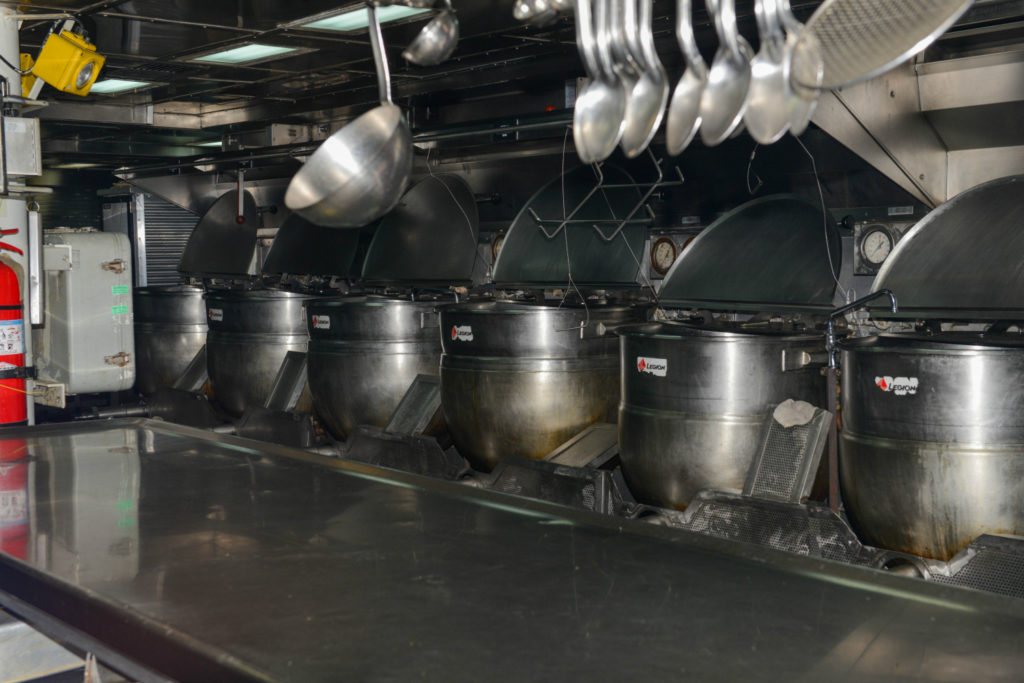 Imagine how much soup you can make at one time!

Food is bought by the pallet and delivered at least once a week. Even when the USS Bataan is out at sea, they still receive shipments from supply ships, which can be considered something like “floating warehouses.” With so many mouths to feed, it’s important to keep an accurate inventory of everything in the freezer, chill boxes, and dry storage at all times.

After getting a tour of the galley, we went back to the dining area to start our radio podcast. Howard was able to get to know some of the sailors a little better, and ask them some fun food-related questions. He even had a chance to interview the commanding officer of the USS Bataan, Captain John A. Carter who shared his favorite meal on the ship as well as his favorite signature dish. (You’ll have to listen to the podcast to find out what they are!) 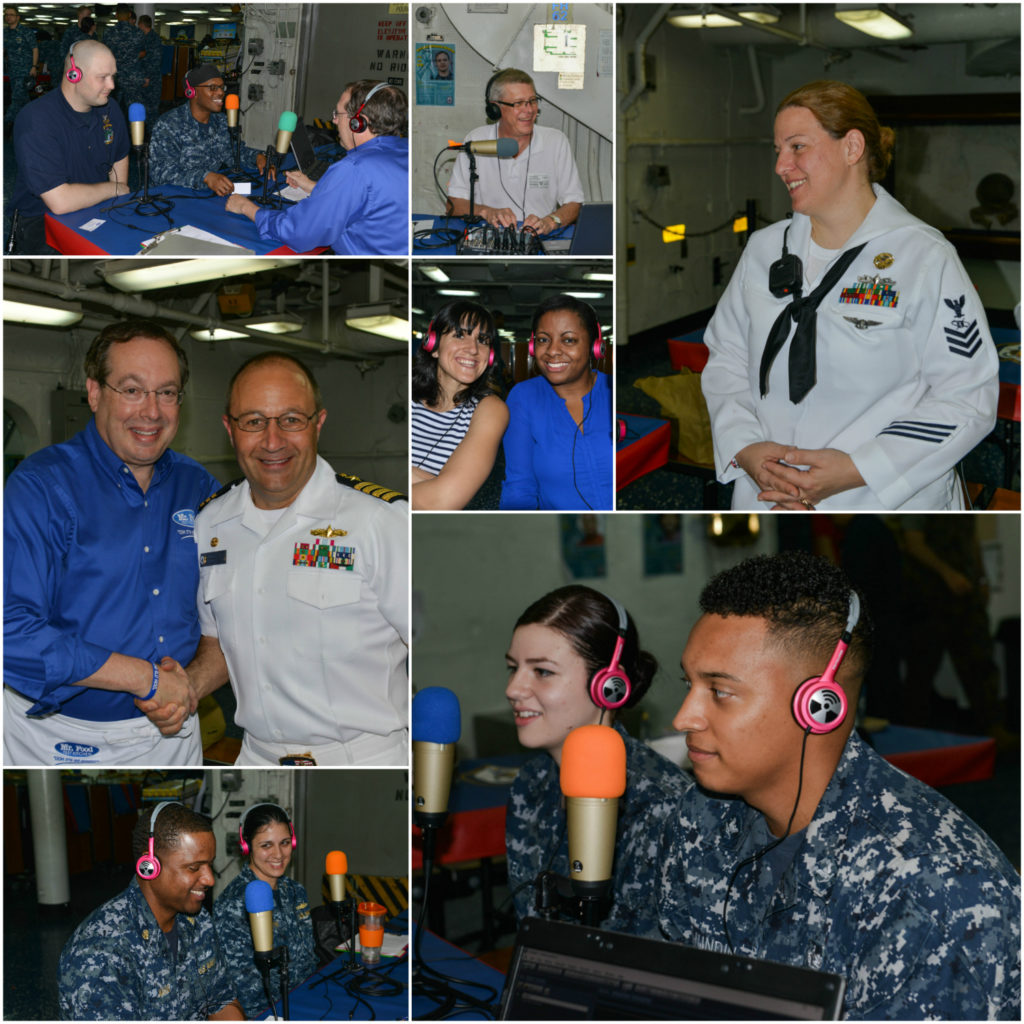 Something I learned from listening to the sailors talk about food is that food is really used to boost morale. In fact, a few of the sailors talked about the food days they look forward to, like Taco Tuesdays and Burger Day Wednesdays. They even enjoy surf and turf once a week!

If you want to hear more about what the sailors enjoy eating onboard the USS Bataan, check out the free radio podcast. You’ll also get to know why some of these sailors joined the U.S. Navy and how they feel about serving their country. 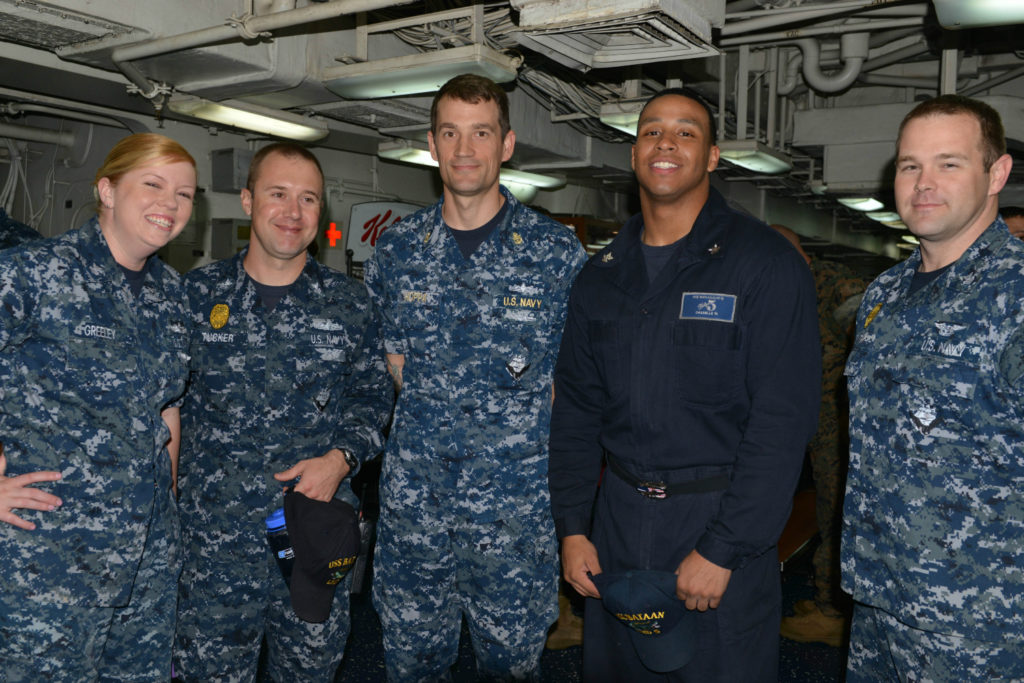 Nothing is better than seeing all of this stuff in real life and getting to know a real sailor, so I highly recommend you try and check out the Fleet Week nearest you whenever you get a chance. You can find a list of events here.

Here’s Howard at the end of our tour. Can you caption this? 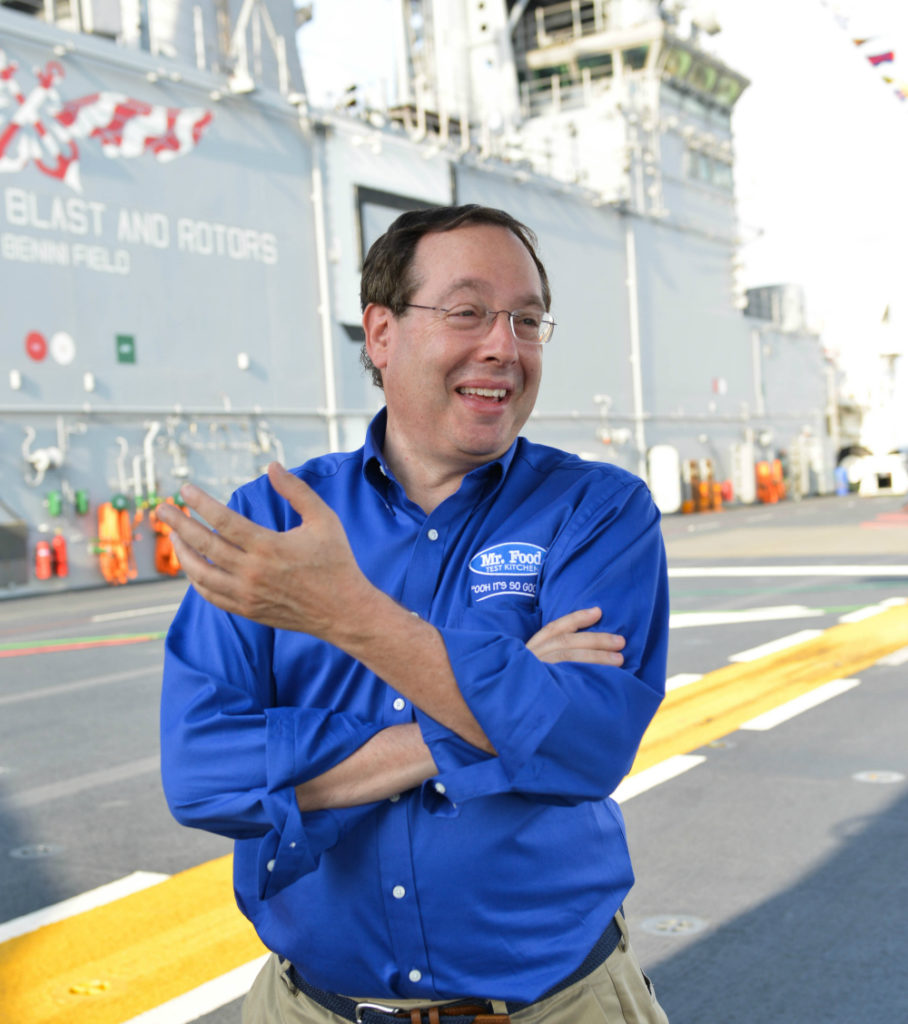 Click here to check out even more photos from our day on the USS Bataan.

Thanksgiving is almost here and Christmas is just around the corner! That means you early planners are already putting together this year's menu. If … END_OF_DOCUMENT_TOKEN_TO_BE_REPLACED

So why am I crazy about the slow cooker? Let me tell you. There is a stereotype that college students live off of microwave pizza, cereal, and instant … END_OF_DOCUMENT_TOKEN_TO_BE_REPLACED