I LOVE to travel. When I was in college, I was lucky enough to have the opportunity to study abroad for a semester in Wales. Not only did the university arrange plenty of cheap, weekend trips, but we also had the entire month of April off to go travel. And, as any traveler would know, you just can’t beat the food.

One of the meals I ate while in Greece: gyros!

On those nights when I’m salivating at the thought of visiting another French café or eating in an Italian pizzeria, I look for recipes to satisfy my cravings. That’s why I’m so excited about our latest eCookbook, International Favorites: 6 Menus from Around the World. We’ve teamed up with our friends at the National Frozen & Refrigerated Foods Association, Inc. to recreate beloved dishes from around the world. They even use some handy shortcuts with refrigerated and frozen ingredients, so you can prepare your meal in half time the time without sacrificing on taste!

You’ve got an array of different cuisines at your fingertips, including American, Chinese and Thai, German, Greek, Italian, and Mexican. We’ve got a sampling of a few of the recipes you’ll find in our International Favorites eCookbook below: 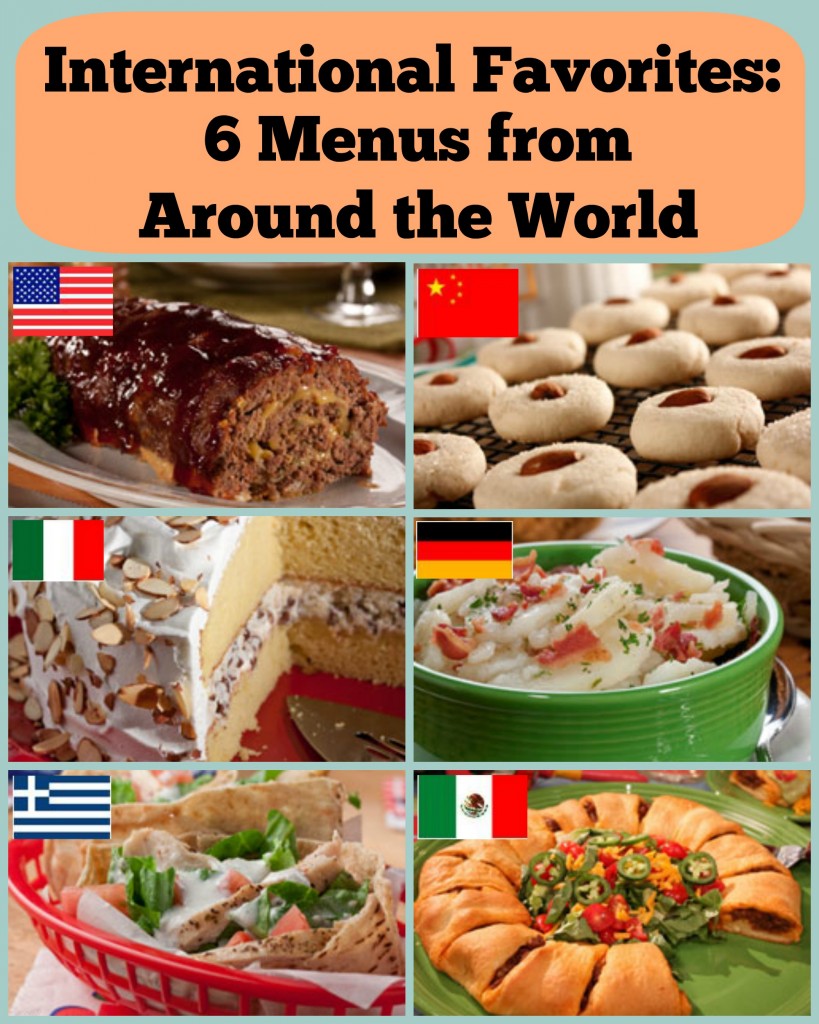 Chinese recipe – Chinese Almond Rounds: These traditional almond butter cookies are supposed to help bring you good luck! (I know it’s already your lucky day if you get to feast on a few of ’em.)

Italian recipe – Cassata Cake: This is one of the site’s most popular Italian desserts… and for good reason! It’s an elegant homemade cake that concludes any meal with a bit of flair. It may even make a nice sweet treat during breakfast.

German recipe – German Potato Salad: Spring is the time for potlucks, which means you can’t have too many deli salad recipes around. This particular potato salad recipe uses bacon, which is reason enough to make it a keeper.

Greek recipe – Chicken Gyros: You saw my own photo from a Greek restaurant above, and this recipe is just as good as the real thing. The cucumber sauce alone is reason enough to give it a try. Talk about heavenly!

Mexican recipe – Taco Ring: This dish is the ultimate in versatility. You can serve it up as an appetizer for a party or make it for dinner. It works either way! I especially love how simple it is to throw together. Just combine the ingredients for the filling and stuff it inside some crescent roll dough, and you’ve got yourself a meal!

Our International Favorites eCookbook has plenty more recipes where those came from. Be sure to check it out to see how you can re-create your most cherished dishes from around the world right at home!

We want to know! What type of cuisine do you just LOVE to cook? Let us know in the comments below!

Thanksgiving is almost here and Christmas is just around the corner! That means you early planners are already putting together this year's menu. If … END_OF_DOCUMENT_TOKEN_TO_BE_REPLACED

So why am I crazy about the slow cooker? Let me tell you. There is a stereotype that college students live off of microwave pizza, cereal, and instant … END_OF_DOCUMENT_TOKEN_TO_BE_REPLACED