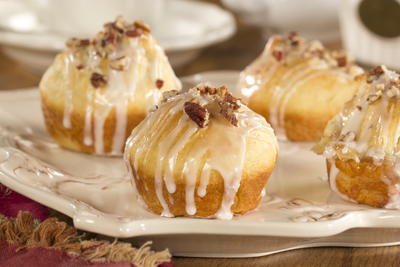 How do you bake up some kitchen magic of your own? Make Mighty Marshmallow Crescent Puffs! They'll wonder where the marshmallow went, and leave you speechless with how fast they'll make them disappear!

I have made these for years, but use the Rhodes Texas Frozen Dough. The secret is to do your marshmallows first, flatten the dough and place the sugar coated marshmallow in the center of the dough using a tongs. If you get sugar on your fingers and the on the dough it will not seal shut. I then dip the top of the dough into melted butter, then the cinnamon sugar, place it in to a large muffin pan with the topping on the top. Let them raise and then bake...so good!

Have not tried these... think I will try flavored mashmellos.

I'm not much for sweets, but this recipe intrigued me. I made savory meatball crescents by rolling defrosted Italian meatballs in the dough and baking them as otherwise directed in the marshmallow recipe. Dipped in marinara sauce, they are delicious. I think the savory recipe could be used in many ways, such as plain meatballs dipped in any number of dips, or Swedish meatballs dipped in a dill sauce. The varieties are endless. Thanks for giving me one more appetizer in my arsenal!

Will this recipe work with stale marshmallows?

These were delicious. My family loved them.

Can these be frozen to eat later?

Hello! We do not recommend freezing these, since the sugar in the marshmallow and in the drizzle will just melt when reheated, and it will not taste good.

Me and my fiance just made these for desert for dinner tonight. Most of them busted before they were even done. They tasted great, but we were not happy about them busting.

Oh no! So sorry to hear that these did not stay together for you! Maybe the seams were not pinched together enough? We hope you'll give these another shot and let us know if it works out better for you!

This is simple and good.I dipped some in chocolate and that was yummy to.

A friend brought these to a church supper tonight. They were delicious! If processed food, sugar and butter are supposed to be so bad for you, WHY do these have to taste so good?

Let the summertime flavors of our Seashore Linguine whisk you away to a seaside afternoon! We top our linguine with an herb-based clam sauce and some grated cheese, that'll make you wish you could pack it all up and head to the shore!